Niall Cooling is a Chartered Engineer and Feabhas founder, one of the leading independent providers of training and consultancy for real-time embedded systems development and software competency. He has been delivering training and providing consultancy and mentoring to a wide variety of leading electronics companies world-wide for over 20 years. Niall regularly works with a wide range of industries, ranging from industrial control to consumer devices and defence. Much of his recent work has been guiding companies around the necessary skills and tools to comply with automotive standards, such as ISO 26262, MISRA-C and Adaptive-Autosar. 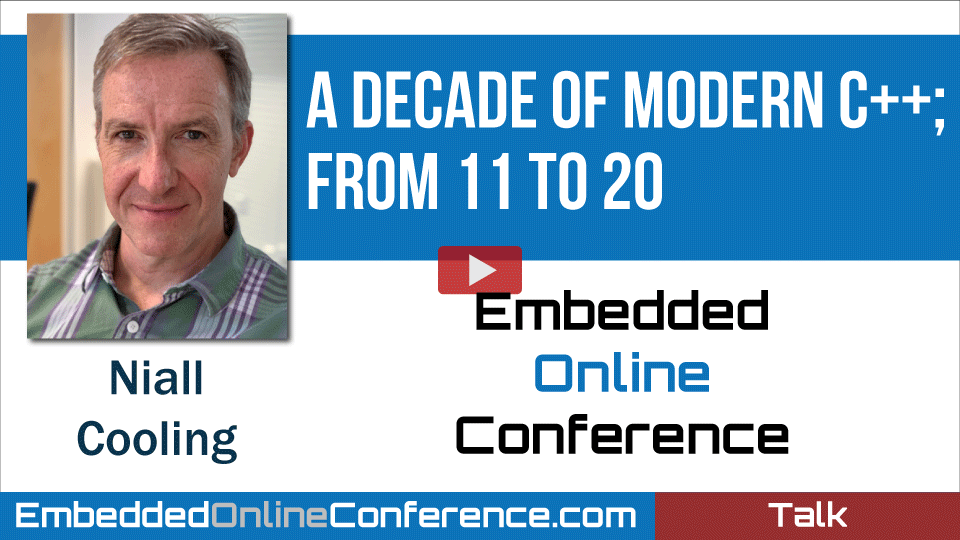 In 2011 ISO published a new version of C++. The C++11 standard was a major change to the language, not only from syntactical perspective but, more significantly, requiring a new approach to designing and developing with C++.

Over the last decade, we have seen three further revisions of the standard (C++14/17/20), culminating in the release of C++20 in December of last year.

However, many embedded engineers are still wary of C++ and live with the misconception that it is unsuitable for embedded development.

This talk looks at the evolution of C++ and where an embedded engineer may realise significant safety and performance benefits by adopting modern C++.

Regarding copy elision and return value optimization: I was shocked this was not already part of the standard as I thought! I've relied on this in some code from 25 years ago (!) to efficiently return objects from functions (without copying via copy ctor). I just ran some tests to be sure: believe it or not RVO copy elision was performed by the 1995 Borland 5.0 16-bit C++ compiler (which I'm still occasionally using to support an old embedded x86 product), as well as GCC 5.4 from 2014. Thanks again, Best Regards, Dave

Hi Dave,
Copy-elision has been a fairly standard compiler optimization for many years now (though I had no idea it would work on the Boland compiler). I certainly worked on GCC back in the 2.x days. However, it was very dependent on the toolchain, optimisation settings and the code you wrote. For example to get copy-elision to work on many compilers you had to write a copy-constructor for it then to be eluded. If you didn't have a copy-ctor then the compiler would default back to shallow copies. The major benefit in C++17 is making it mandatory.
Regards,
Niall.

Great talk, thank you! Got good reminders of what's possible with copy elision and std::optional. Will have to simplify my error handling in the future :)

Hi Harri,
I find it more intuitive to use, especially with tuples/optional especially for error management.
Thanks,
Niall

Hi Niall - Thanks for a great talk! I tried to have a look at your blog but each entry ends with [...] but no way to see the complete entry (I expected the ellipsis to be a link but it was not)?
https://blog.feabhas.com/category/programming/
Thanks, Best Regards, Dave

The [?] is a wordpress marker for a break. If you click on the blog title you?ll see the full blog

Thanks Nial, I eventually figured it out. Really unfortunate that the WordPress template does not use standard link formatting to make it obvious and/or make the ellipsis a link! Thanks again for a great talk,
Best Regards, Dave

Hi Niall - Thanks for great talk. Tuples and optional do they use dynamic allocation in their implementation ?

H Ion,
No they don?t. Tuples are basically an anonymous struct so same memory model. optionals are a union of the type and a bool.
Is a simple as that.
Niall.

Found I was well leveraging lots of features of C++11, but not so much for c++14/17. Still room for improvement. Definitely some construct I will be investigating further after this lecture.
Well done and thanks for sharing this knowledge!

Don't underestimate the copy-elision & structure-binding from C++17, it's surprising how much it changes your code, especially regarding readability and maintenance.
Alway room for improvement, I'd like to see better support for compile-time lifetime management as with Rust.

That's the two which caught my attention the most. I will also definitely add std::optional template, and nodiscard attribute to my arsenal. About room for improvement, I was speaking about my usage of the C++ features, not the standards themselves. Hope it didn't create confusion ;)