Embedded engineer with 7 years of industry experience and a passion for developer tools. Worked at Pebble and Fitbit helping them ship and maintain millions of wearable devices running RTOS-level firmware. Now a co-founder at Memfault, which is building monitoring tools for the IoT space. You can find some of the articles I've written at: https://interrupt.memfault.com/blog/authors/tyler/. 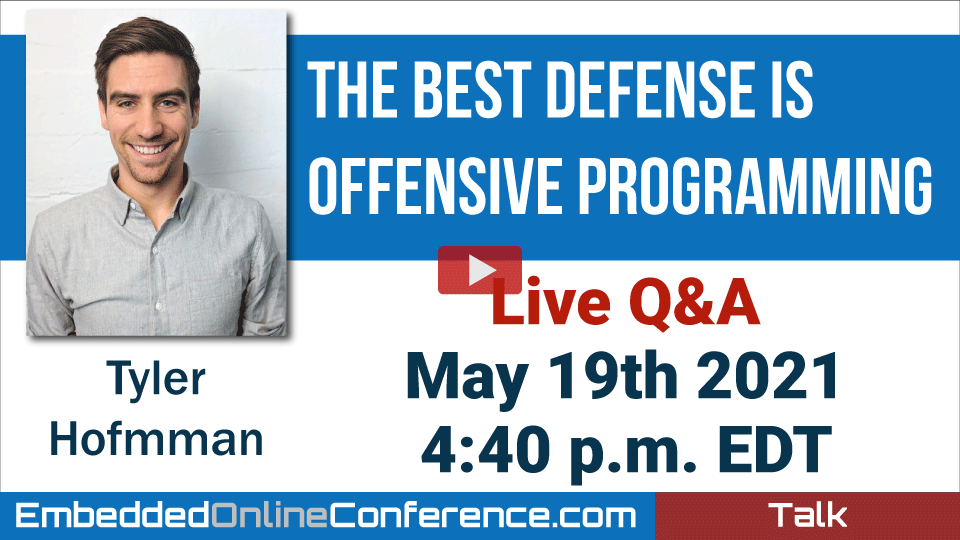 Live Q&A with Tyler Hoffman for the talk titled The Best Defense is Offensive Programming
UpvotesNewestOldest
moredatalesscenter
Score: 0 | 1 year ago | no reply

Hi Tyler, the talk and Q&A was very interesting and definitely worthy of being included at the conference, IMHO. I tend to be the only one in my team using assert occasionally, but I?ll try now to sprinkle much more in! What I?ve seen a lot in my career is that a function/method provides a return code, but then it?s often never checked by the caller somewhere in the middle of the stack, effectively swallowing the error. I guess that?s why exceptions make sense in the non-embedded world, as they?re harder to ignore. Different people writing their bit of the code often have their own coding style, such as return bool, -1 or an enum, so there?s often a proliferation of different statuses all meaning the same thing, but often the meaning gets lost like a game of Chinese whispers going up the stack. I often return a bool ok, as it?s human readable what it means and easy to logical AND to daisy chain several. But yes, fail faster with asserts and fix the code , so it doesn?t happen again is best. Thanks again!